Our NFC Implants are the most advanced chips offered for private use.

We combined maximum connectivity with a large data capacity in a size of only 2x12mm. This small size offers communication with devices from “under the skin” and can be injected with a syringe in order to comfortably upgrade your body.

What is a NFC Implant?

A NFC Implant is a passive transponder that is reads or records data using an active transponder i.e. a NFC compatible smartphone. The transponder can serve as a storage space for emergency information or to share certain media. In its original use, the transponder was used to register animals and allocate them to their owners. NFC implants are often used as an alternative to ears tags on livestock. The information on the implant can be changed or renewed, for example if the animal develops an allergy, etc. which offers an advantage for this method of registering information. After a considerable amount of time, the benefits of NFC implants for humans were recognized. From a medical point of view it is also an advantage to have crucial information in case the patient (unconscious or unresponsive) has allergies, is on medication or to know his/her blood type. Some people have gone so far as to have their will saved to their chips. Find out more ways to use an NFC chip here. 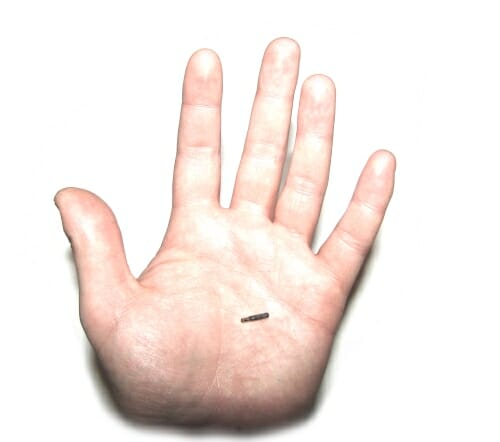 The primary functions of an NFC implant

Unlock the door to your home, your vehicle or start your motorbike – without a key. We opened the possibilty to shift a part of the future to the present with an NFC implant. Since every NFC implant carries its own UID (serial number) you are able to identify yourself using NFC compatible devices. The UID, which will always stay the same, is transcribed to the implant, the device that has recorded your UID will then grant you entry or turn on.

NFC is built into every current android smartphone making the NFC implant a strong partner with numerous possibilities. Data-sharing functions are possible thanks to the small storage space provided in the chipset. The storage containing your information is activated when an NFC equipped smartphone/device is held against the chip. The data and how much of it you wish to share and upload from your device to your chip, is solely up to you.

Both main functions can be used independently of each other.

How does an NFC Implant work?

As mentioned before, at least one active transponder is necessary to exchange data, in most cases this would be an android smartphone that supports NFC. The passive counterpart, in this case the NFC implant, doesn’t posses an own energy source, thus cannot act on it’s own. The active device (smartphone) sends an electromagnetic impulse via the antennae that is located in its battery to the implant. When the 13,56 MHz impulse reaches the implants antennae, the energy that is set free can change the signal from the smartphone just enough to receive a small amount of data. In a broad sense, comparable with a sonar signal.

What are the advantages of an NFC Implant?

The implant can be used in many ways and most of the possibilities are far from exhausted. Since, for example, the MIFARE NTAG216® chipset can store small data and also has a UID (serial number), the NFC implant can be used both as an identification feature and as a small data memory that can be used as a business card or for sharing media. The UID allows you to identify yourself at door locks based on NFC or to log in to PC applications with a corresponding NFC reader.

The purpose of the implant is that everyone can share data without having to enter a password. A password can protect the implant however it would also limit its possibilities. Entering a password whenever transferring contact data would eliminate the advantage the chip offers. A transfer is only available within a few centimeters and only data that has been purposefully placed on the chip can be exchanged. NFC technology is used in price tags to identify items at a register or membership cards. Locating or transferring data from a distance is not possible with a transponder. A smartphone with personal data, GPS, internet and its own power flow is a much larger and more interesting surface to attack someone. An NFC implant contains such a scarce amount of metal that is isn’t even detected in airport security checks.