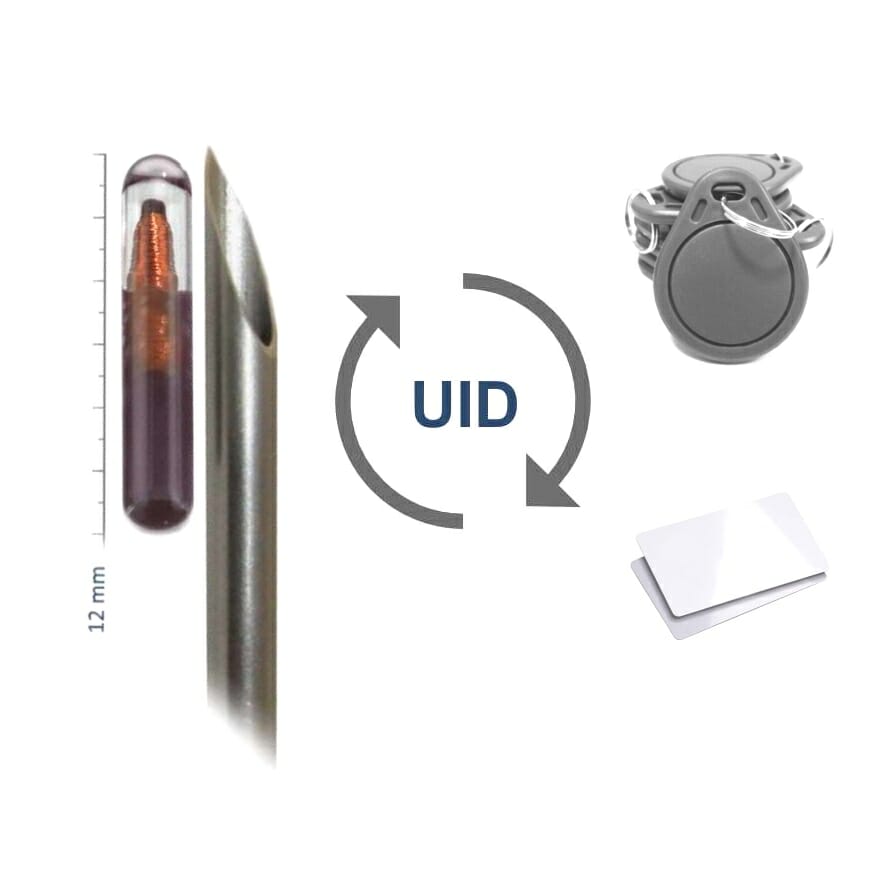 Just copy your existing access or membercard to your chip implant! With this package you get everything you need to implant yourself or one of our partnerpiercer an RFID chip. This Elite version of the X3 Elite also allows copying / cloning existing maps and tags (UID Changeable) on the implant.

The NFC Set X3 Elite contains an NFC chip implant of the type ISO 14443 / Classic compatible. This is set in a biocompatible protective cover of the brand SCHOTT and measures a total of 2mm x 12mm. The injection needle containing the chipset will be shipped in sterile protective packaging. This Elite version is not a NXP chipset like the X2, but with this version it is possible to clone other chips. If you already own an RFID / NFC card or Tag in Classic format, this existing chipset can be copied to the NFC implant (UID Changeable Sector 0 and 1).

Please keep in mind that to copy tags you need an NFC writer (eg ACS ACR122U) and our software. A faulty handling can lead to defective. If you are unsure whether your existing access system is compatible, we offer testcoins.

What does cloning or copying of the chip implant mean?

The UID was originally used as an authentication option to terminals. In concrete terms, this means that a reading unit, such as e.g. An external antenna picks up the UID / serial number of the respective transponder and forwards it. Next, a controller will check to see if the serial number is being accessed or denied if e.g. the UID is not known to the system. This procedure is very common in everyday life and has the benefit of quickly and efficiently checking whether the cardholder is authorized or not. This test method can be found, for example. for electronic access controls in fitness studios, entrance doors, office buildings or as access controls for electronic time stamps, PC units, public transport, monthly passes and much more. However, the principle behind this technique always remains the same.

Since the exchange or editing of the sector 0 was not possible and for NXP chipsets is still so, had the additional UID in the system, which decides on access or access, learned or replaced, because the implant had to keep its fixed UID. It is therefore forced in other implants to learn a new “access card” that is usually very complex, since often there is no access to the system that manages the transponder. For example. in offices or gyms, there are often communication difficulties. The X3 Elite, on the other hand, has the unique feature of incorporating the serial number of the existing transponder so that eg. the turnstile in the gym or access control in the office emanates from the original transponder and access is granted.

How to become a CYBORG

The NFC implant without the intervention of a partner piercer, contains everything needed to set an NFC implant. Please note that in case of inexperienced implantation, veins and muscle tissue can be injured. Please consult specialized personnel in order to minimize the risk of injury. You are also welcome to use our partner piercer without the intervention that can be booked through us. However, we can not calculate the costs of the procedure in this case.

This option not only includes the injection needle chipset, but we also handle the payment processing of the injection at one of our partner piercers. After the purchase, we inform the selected piercer about the purchase. Now you can individually arrange an appointment with the piercer. If we do not have a piercer in your area, please contact us, we will look for a suitable piercer for you free of charge. Again, there is a 30-day reflection period.

NFC Implant notices during daily use

The following notices are not government decreed, they are test references from customers and self-tests. In some exceptions or under different circumstances, results may vary.

Security checks will not detect the NFC Implant as the metal amount is too minor.

The NFC Implant can endure high velocities, up to Mach 3 without any complications, it will simply press itself lightly into the tissue.

Visiting a sauna is no problem for the NFC Implant. Its temperature is regulated by your own body temperature and sweat automatically.

High performance sports such as rock climbing or martial arts can be pursued easily, protective gloves should be worn when using firearms to avoid injuries .

Imbedded in tissue that protects your NFC Implant, you can work worry-free with heavy machinery or tools.

If your occupation requires the use of firearms, the recoil will not have an impact on the NFC Implant. Half- and full automatic firearms with a 5.56mm – 9mm calibre were tested.

Regular magnets will not have an impact on the implant and even CT and MRI screenings had no effect based on the reports of customers.

Unfortunately we were not able to keep the list up to date anymore. Therefore we post a Wikipedia link with all smartphones that are equipped with NFC and a NXP controller. If no NXP controller is installed, the implant has to be formatted with a U122 ACR reader. Please keep in mind that the transmission power can be limited by a possible aluminium housing. The list below is for user feedback only.
https://en.wikipedia.org/wiki/List_of_NFC-enabled_mobile_devices